The Whistler Health Care Centre operates a facility in the village at the base of Whistler Blackcomb, including a helipad and trauma center. In 2003, the Whistler Health Care Centre had 22,665 emergency visits. That is a considerable increase from the 500 patients per year it treated when the center was just a small trailer in 1981. Of the over twenty–two thousand visits in 2002, 25% were from out of country and 43% were Whistler residents while the remainder included visitors from other parts of BC, other provinces and WCB claims. 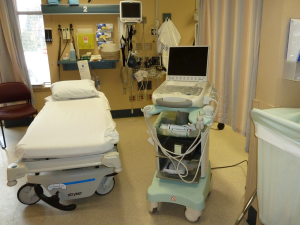 In the spring of 2004, the AFOW received a request from the WHCF to assist in the purchase of health care equipment for the Whistler Health Care Centre. Specifically as part of its expansion of the centre’s triage area, the WHHC was in need of wall–mounted vital signs monitors. The AFOW donated $10,600 for the purchase of one vital signs monitor. Each unit can continuously monitor pulse, blood pressure and blood oxygen saturation and will sound an alarm if levels for the patient are not safe. Given provincial and federal budgetary constraints, the governmental funds that WHHC would receive would not be sufficient for all its desired equipment needs.

In December 2005, the AFOW received a request from the WHCF for a contribution towards the purchase of a $50,000 physician operated bedside ultrasound machine used to diagnose life–threatening chest impact and other injuries. The board discussed the importance of such a machine in the Whistler community, and agreed to fund the entire purchase cost immediately – representing the single largest contribution in the history of the AFOW at that time.

In May 2006, the machine was delivered and according to a WHCC emergency physician a call to employ this piece of equipment occured almost immediately. The device helped save the life a patient who had crashed while mountain biking.

In late 2006, the Whistler Health Care Foundation launched the largest fund raising effort in the history of the organization – to raise over a million dollars – to purchase a CT Scanner and build a special room devoted exclusively to it’s use. Presently anyone with a severe injury which merits use of a CT Scanner must be transported to a Vancouver hospital since there are none in the Sea to Sky corridor. The AFOW granted $10,000 towards this important initiative.

The AFOW believes that these equipment donations for the emergency room benefit the Whistler community as well as Americans and other international tourists to the resort.

In 2014, the AFOW Board granted the WHCC Nursing department a $15,000 grant and in 2015 a $10,000 grant to make training possible to update nursing staff on rural emergency medicine.

For more information about the Whistler Health Care Foundation call 604-932-4911 or 888-992-1110 or
visit http://www.WhistlerHealthCareFoundation.org.